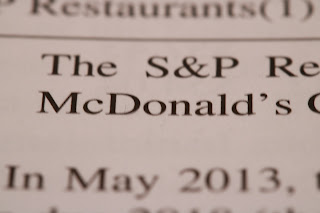 Check out the highest yielding and best performing Aristocrats YTD. 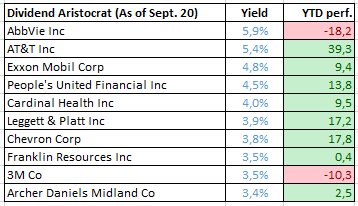 AT&T (T) is the other Aristocrat yielding more than 5%. However the telecom- and media giant is one of the best performing stocks this year with a 39% total return.

Seven Aristocrats do even better dan AT&T, led by Target (TGT) with a 65.5 percent total return this year. The average return in 2019 is 19.5 percent. Apart from AbbVie three other Aristocrats are losers in 2019; Walgreens (WBA), Pentair (PNR) and 3M Co (MMM).

The lowest yielding Dividend Aristocrat currently is Roper Technologies with just 0.5%. However the industrial company has gained 35.5 percent YTD as one of the better performing Aristocrats.

Last week McDonald's was the latest Aristocrat to hike its dividend with a 8 percent increase.
Dividend Aristocrats

S&P Global (ticker symbol SPGI) will raise its dividend by 10.4% to 85 cents per share quarterly in 2022. This is the 49th consecutive year of dividend increases by the company.
Read more

Linde plc, formerly Praxair, will raise its quarterly dividend by 10.4 percent to $1.17 per share in 2022. This will mark the 29th consecutive year of dividend increases by the industrial gases company.
Read more

Dividend Aristocrat Cardinal Health (CAH) will increase its quarterly dividend by 1% to $0.4957 per share in 2022, marking 38 years in a row of increased dividends.
Read more